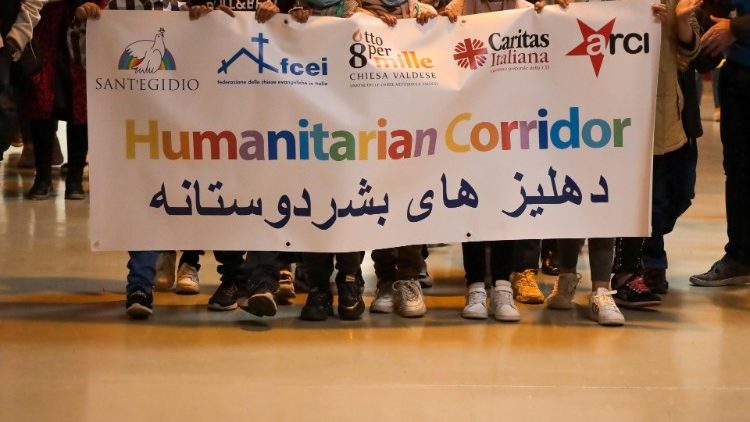 152 Afghan refugees arrived in Rome, on Thursday, as  part of the Humanitarian Corridors Scheme  promoted by the Italian Episcopal Conference, through the local Caritas network, the Sant’ Egidio Community, the Federation of Evangelical Churches in Italy, the Waldensian Table, the Organization for Migration (IOM), the Italian Catholic Lay associazion ARCI, and the U.N.  High Commissioner for Refugees UNHCR). Their arrival  followsan an agreement with the Italian Ministries of the Interior and of Foreign Affairs and International Cooperation.

The refugees, traveling from Islamabad, in Pakistan, were welcomed at 12.00 at Fiumicino Airport by Marco Impagliazzo, president of the Community of Sant’Egidio, Archbishop  Giuseppe Baturi of Cagliari, general secretary of the the Italian Bishops’ Conference (CEI), Fr.  Marco Pagniello, director of Caritas Italiana, and by a member of the Council of the Federation of Evangelical Churches in Italy.

The Afghan asylum seekers, who fled their country after the takeover of the Taliban regime in August 2021, and many of whom have been residing in Pakistan for over a year, will be hosted by associations, religious congregations, communities and individual citizens in various Italian regions,  and will participate in an integration process: minors will be immediately enrolled  in school, while adults will attend language courses to learn Italian and once they obtain the refugee status will be allowed to work.

An example for Europe

The humanitarian corridors are entirely self-financed by the proposing organizations and supported by the generosity and commitment of many private  citizens, thus allowing to conciliate solidarity with security.

Speaking at a press conference shortly after their arrival, Marco Impagliazzo, said Italy’s Humanitarian Corridors scheme sets an example for the European Union on how to best address the migration crisis, by welcoming and integrating those in need of humanitarian protection, through a close collaboration between State and Church authorities and local non-governmental organizations (NGOs).

Addressing the refugees he gave them a warm welcome, saying that in Italy they will find a future, with home, school and work that war in their country has denied them.

“In August 2021, when the borders of Afghanistan were closed, we made a promise: we will not forget you! We have not forgotten you and have prepared a home for you. Today we are happy to welcome you. Help us build a common future here in Italy”, he said.

Over 5,300 in  Europe thanks to humanitarian corridors

So far the scheme has allowed over 5,300 refugees to enter Europe, in addition to over 1,800 Ukrainian citizens, hosted Sant’Egidio in various European countries. More arrivals in Rome from Lebanon and Libya are expected in the coming days.

In recent weeks Italy’s new far-right-led government has been strongly criticized by the opposition parties and at European level for resuming a hard line against privately run ships operating to rescue migrants in distress in the Mediterranean and bringing them on Italian soil.